Visit www.words4sail.com for links to my other writings from architecture/construction, food and drink, gardening, healthy and green living to medical and surviving grief

Eating Scandinavian – Interesting Foods From The Top Of the World

Eating Scandinavian – Interesting Foods From The Top Of the World
Like their Viking ancestors, modern-day Scandinavians eat from the sea, the plains and the mountains of their respective countries. While the kingdoms of Denmark, Sweden and Norway naturally fall under the Scandinavian banner, Iceland and the Faroe Islands are also included.

Discover this multi-national smorgasbord of gastronomic delights and culinary oddities anytime of the day.

Øllebrød (Denmark)
Made of old rye bread and a light beer, this thrifty porridge is sometimes enjoyed with a dollop of citrus fruit-flavored whipped cream instead of plain milk.

Laks og eggerøre (Norway)
Open faced sandwiches start many a Norwegian’s morning. When bread is topped with this smoked salmon and eggs combo, the day is bound to be special.

Skinka (Sweden)
Like its western neighbor, Norway, open-face sandwiches often are the first meal of the day. Skinka (ham) is a popular choice to place atop knäckebröd a crispbread – round and made from rye.

Skyr (Iceland)
Grab a spoon and delve into some Skyr. The soft, yogurt-like cheese originated in Norway, but have been an Icelander’s breakfast item for centuries. It was first mentioned in old sagas of this island nation. Now commercially- produced, Skyr comes in different flavors.

Tvøst og spik (Faroe Islands)
Pilot whale meat often ends up on restaurant menus and locals’ tables of this country strewn over a dozen islands. It is typically boiled, with its blubber and cold potatoes. Health authorities have some concerns over whale consumption, especially for pregnant women, so perhaps skerpikjøt (dried mutton) might be a better choice.

Fläskpannkaka (Sweden)
Chase away the chilly temps dining on thick pancake with diced and delicious pork tucked in the middle.

Reinsdyrkjøttkaker (Norway)
Reindeer live throughout the Nordic countries and are often used as venison in many recipes. This dish is meatballs often accompanied by oven-baked potatoes and lingonberries. 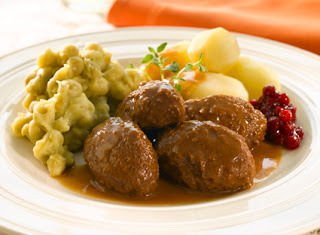 Leverpostej (Denmark)
Danes love their sandwiches. This liver paste (usually pork) is spread over slices of rye and white bread

Pylsur (Iceland)
Icelandic hot dogs are a combo of beef, pork and lamb. To eat like a local, order it "eina með öllu.” It means with everything and includes ketchup, onions both raw and crunchy deep-fried, the tang of remoulade and a sweet brown mustard. To be more gastronomically adventurous – try smoked lundi. That’s puffin to most of us. 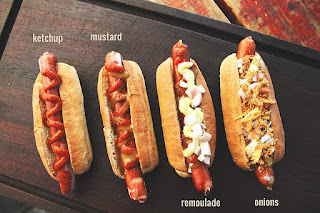 Rødgrød med fløde (Denmark)
The Danes stew summer fruits like rhubarb, strawberries and raspberries until they are thick and pudding-like. Cream is sometimes poured atop for a refreshing end to a meal.

Ostkaka (Sweden)
Although it translates to “cheesecake”, do not order this expecting the American version. Served as a square, instead of a slice, it is lukewarm and topped with jams such as cloudberry or lingonberry. 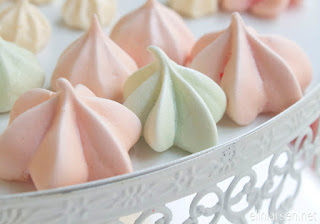